While many professed Christians continue to idolize President Donald Trump, they fail to recognize who and what he truly is, and yes, he does provide us with words to that effect, as well as actions and inactions. In this episode, we’ll take a look at video and audio that paints a picture of President Trump not only as not Christian, but even antichristian.

Articles and videos mentioned in this episode.

Trump and the Church’s Failing

2 And the beast which I saw was like unto a leopard, and his feet were as the feet of a bear, and his mouth as the mouth of a lion: and the dragon gave him his power, and his seat, and great authority.

3 And I saw one of his heads as it were wounded to death; and his deadly wound was healed: and all the world wondered after the beast.

6 And he opened his mouth in blasphemy against God, to blaspheme his name, and his tabernacle, and them that dwell in heaven.

7 And it was given unto him to make war with the saints, and to overcome them: and power was given him over all kindreds, and tongues, and nations.

8 And all that dwell upon the earth shall worship him, whose names are not written in the book of life of the Lamb slain from the foundation of the world.

Luke 4:31Then He went down to Capernaum, a city of Galilee, and was teaching them on the Sabbaths. 32And they were astonished at His teaching, for His word was with authority. 33Now in the synagogue there was a man who had a spirit of an unclean demon. And he cried out with a loud voice, 34saying, “Let us alone! What have we to do with You, Jesus of Nazareth? Did You come to destroy us? I know who You are—the Holy One of God!”  35But Jesus rebuked him, saying, [n]“Be quiet, and come out of him!” And when the demon had thrown him in their midst, it came out of him and did not hurt him. 36Then they were all amazed and spoke among themselves, saying, “What a word this is! For with authority and power He commands the unclean spirits, and they come out.” 37And the report about Him went out into every place in the surrounding region.

James 2:19  Thou believest that there is one God; thou doest well: the devils also believe, and tremble.

Only verses in all of Scripture that define antichrist, a term not mentioned in any other books, including Revelation, Daniel and 1 or 2 Thessalonians.  John defines antichrist, not as a mere man, but as a doctrine held by “many antichrists.”

And every spirit that confesseth not that Jesus Christ is come in the flesh is not of God: and this is that spirit of antichrist, whereof ye have heard that it should come; and even now already is it in the world. -1 John 4:3

For many deceivers are entered into the world, who confess not that Jesus Christ is come in the flesh. This is a deceiver and an antichrist. -2 John 1:7

Emblem of the Round Table that Trump was knighted to in the above video. 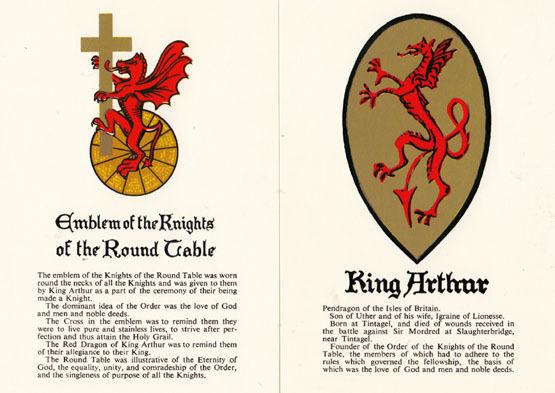 The false gospel, which is contrary to the true Gospel, of Donald Trump, which Scripture declares is anathema, ie. damned (Galatians 1:8).

This video I was unable to show due to time restraints but well worth your time to view.  It’s got documentation of how Jews view Trump and his own claim that the occultic Kaballah is “what he’s all about.”

Under The Cover Of DC WWE Inauguration, This Communist Agenda Moves Forward